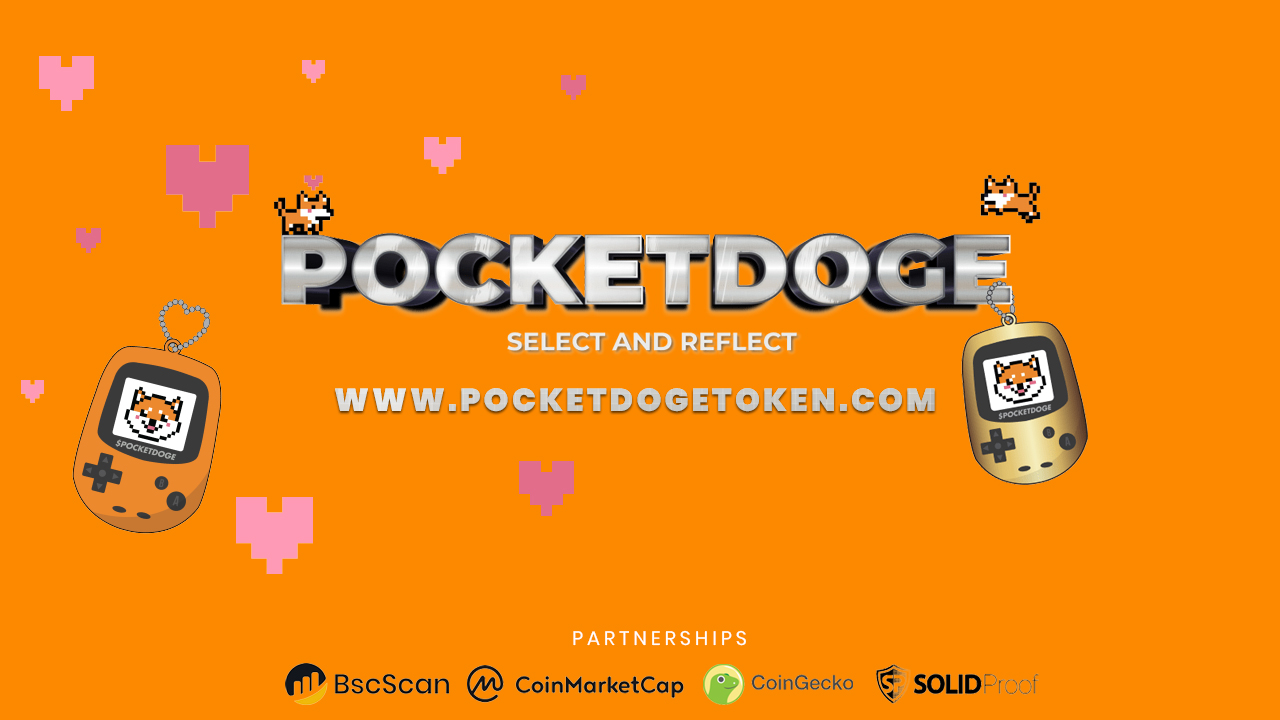 Pocket Doge ($PDOGE), a project developed on the Binance Smartchain (BSC), has announced the launch of its first Play to Earn (P2E) blockchain game, allowing users to earn rewards; purchase of non-fungible tokens (NFTs) to use within the game will be available shortly.  Danger on BSC is the first in a series of planned P2E games, expanding the Pocket Pets ecosystem detailed in the company’s whitepaper.  A decentralized application (dApp), already available on the company’s website, is being enhanced to implement in-app betting, or Pocket Doge agreement deposits (PADs).

In anticipation of its NFT Marketplace release, Pocket Doge unveiled its first ever NFT giveaway. The largest 90 buys who held their investment of the token from its launch on August 17, 2021, through September 11, 2021, were awarded the inaugural Pocket Doge Gold NFT. The NFT was created by a member of the Pocket Doge community and heralds the beginning of the company’s expansion of its NFT marketplace, providing artists with creative and monetary control over their artistic products. The marketplace aims to establish an environment where independent creators of games, music, and art can collaborate and create.

The month-old crypto company has more NFT awards up their sleeves, with Diamond NFTs reserved for future investor awards. The Pocket Doge whitepaper, the official business plan for the project, states the NFT platform and its rewards are expected in Phase 3 of the company’s roadmap.  While currently in Phase 2, Pocket Doge is elated to bring that promise to life early, as the Gold NFTs whet the appetite of many in the community anxious for the full roll out of the Pocket Doge NFT Marketplace. The NFT platform is part of Pocket Doge’s ever expanding ecosystem, featuring exciting new tokens with entirely unique functions. Users invested from the beginning of the journey and who do not sell more than 50% will have priority in the other upcoming releases. “Diamond handed” investors are rewarded within the Pocket Doge community.

Pocket Doge is more than just another P2E gaming platform or NFT marketplace.  As a cryptocurrency, its tokenomics empowers investors to choose fully vetted alternative tokens to receive as rewards in its “select and reflect” technology.  As per a community vote, the project began with Binance (BNB), Ethereum, BUSD, USDT, Cardano (ADA), and Cake, available immediately at launch.  Since then, Everise, Burningmoon, Avalanche’s AVAX, and ELROND have been added as additional reward options, available using the Pocket Doge’s dApp. Future updates to the dApp include voting, betting, and tipping mechanisms, as well as the ability to view statistics on individual holdings, rewards, and totals received.  Future plans also include the creation of a Pocket Doge hardware wallet so that a user’s doge is actually available in his/her pocket.

What Separates Pocket Doge From Other Platforms?

Pocket Doge ($PDOGE) is one of the first projects on BSC that allows users within the community to select and reflect their own tokenomics. A token of $PDOGE in one’s pocket gets them the best of all worlds.

Security in investment is of paramount importance to Pocket Doge.  Pocket Doge is committed to transparency and innovation, dedicated to creating a space in the cryptosphere reflecting these core values.  As such, the company takes the following measures to bring the most dynamic and safe solutions to investors:

The Pocket Doge ecosystem is broad and inclusive, with visions of future projects that support and develop artists as well as giving back to communities in need. As of press time, Pocket Doge has already contributed to five well-established charitable organizations chosen by the community focusing on children’s health, COVID related relief, justice reform, and animal rescue and welfare. Pocket Doge is committed to corporate social responsibility and will continue donating a portion of revenue regularly to vetted charities sourced by the community.

Currently, Pocket Doge’s primary focus is on the gaming and art industries, debuting an original single by Last Name Jones called “Pocket Doge,” producing its music video, and releasing the tongue in cheek minigame Pocket Doge: Danger on BSC video game, available for free on their website prior to the release of the P2E game. Pocket Doge has already announced the launch of Pocket Productions, an NFT based production company that will give artists control over their own artistry, which is often wrestled away from them by record labels.

The Pocket Doge NFT platform will be curated for multiple file types, including images, audio, literature, and independent game development. In this way, the Pocket Doge NFT Marketplace allows creators to mint limited editions of their work, similar to a traditional artist releasing limited series of prints or lithographs. However, unlike tangible prints or lithographs, NFTs cannot be destroyed and their provenance, as with anything on the blockchain, can be traced back to its original creator on the public ledger.

Liquidity was immediately locked for 6 months, in recognition of the importance of exchange listings for the investors. Prior to launch, Pocket Doge conducted three rounds of funding; the  initial two rounds were private sales and made up of early investors with the 70% of proceeds funding liquidity and the remaining 30% fund marketing.