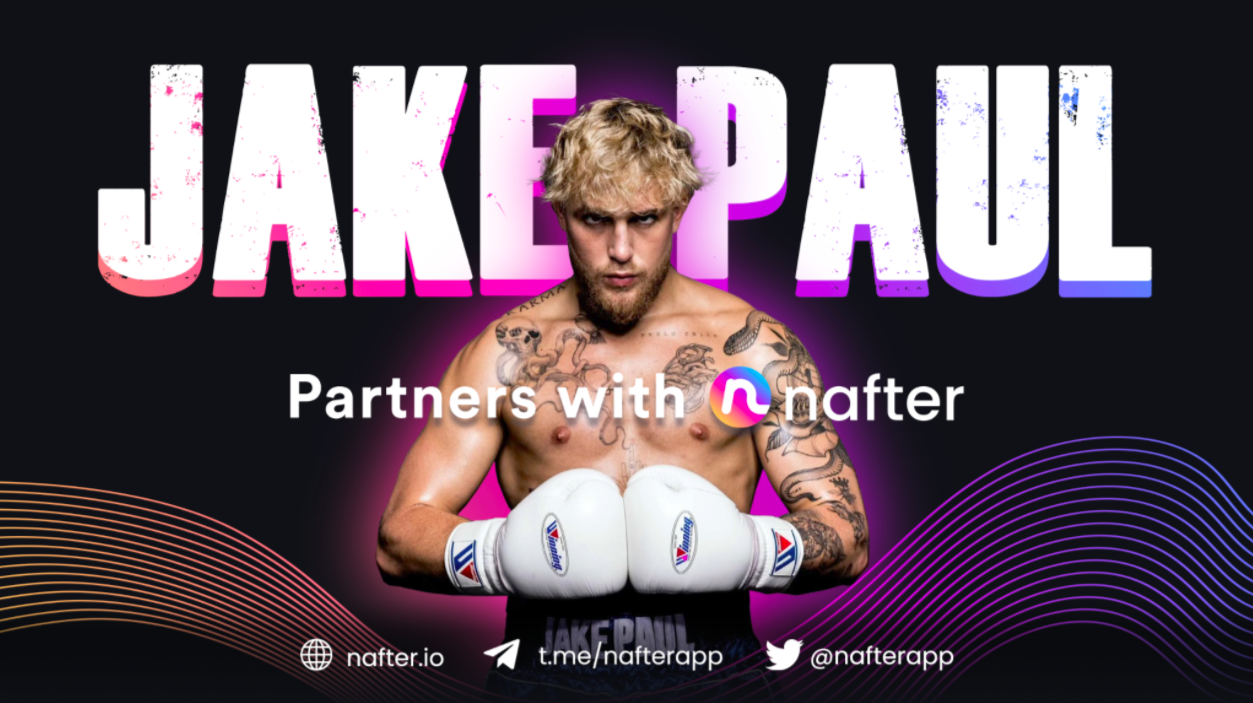 Nafter has entered into a paid partnership with one of the most popular influencers on social media, Jake Paul. Throughout his career, Jake Paul has been trailblazing a unique path for himself. Originally a Youtube superstar who evolved into a successful professional boxer, Jake’s partnership with Nafter is the next leap forward for him and Nafter.

Nafter is a groundbreaking, blockchain-based online NFT social network and marketplace allowing creators to mint NFTs on both Ethereum and Binance Smart Chain networks. Creators can mint NFT content from their phone or laptop, and sell the collectible content directly to their fans and followers for a fixed price or in an auction setting. The Nafter network is built on Binance Smart Chain, and powered by its utility token, $NAFT.

Who is Jake Paul?

Jake Paul has been recognized as an outstanding talent in multiple fields – as a popular Youtuber, a professional boxer, rapper, and a social media personality with over 67 million followers and over 7 billion cumulative views of his content.

In 2020 Paul made his professional boxing debut against the Youtuber AnEsonGib (known as Gib) in Miami. The match between Paul and Gib was the co-feature to the WBO world middleweight title bout between professional boxers Demetrius Andrade and Luke Keeler. Paul won the fight via TKO in the first round.

Jake Paul’s success as a professional boxer is underlined by his currently undefeated record of 4 wins and 3 knockouts.

Jake is also very passionate about blockchain technology, which is where Nafter comes in.

Nafter’s industry-first concept of putting content and collectibles made by the creators on the blockchain is how Jake Paul became interested in Nafter in the first place. Just like Jake Paul, Nafter aims to disrupt the established dinosaurs at their own game.

As blockchain technology is here to stay, the announcement of Jake Paul and Nafter’s partnership aims to propel the discussion about social media content NFTs into the mainstream.

Nafter is targeting the digital-native generation for its platform and Jake Paul’s followers are the perfect match for Nafter’s expansion and continuous collaboration with the very top influencers in the world of social media.

Jake Paul will mint an exclusive NFT on Nafter

Jake’s collaboration with Nafter starts with a unique and exclusive NFT that will be minted by Jake himself. Jake Paul’s exclusive NFT will go on auction on Nafter with a starting bid of 25,000 NAFT tokens. All bidding can only be done in NAFT token.

Jonathan Sulay, Nafter CEO stated “We are very excited to have Jake Paul join us and mint his exclusive NFT on Nafter. Even more exciting is the fact that he chose to use NAFT token as the only accepted method of payment for his NFT bids. This is a great display of confidence in the Nafter platform, as well as an exciting debut of Nafter V1.1 and the NAFT token features. This is a great demonstration to future influencers and content creators who wish to use the Nafter platform to mint content and enter the exciting world of NFTs!”

Less than a month since the successful launch of Nafter v1.0, the team is excited to share the next iteration of the network – Nafter v1.1.

The updated Nafter brings with it a ton of front and backend upgrades, new ambassadors, new partners, and plenty of undisclosed surprises.

One of the most highly anticipated features is going live with the launch of the updated Nafter. The NAFT tokens can now be used as a method of payment for NFTs on the platform, for those creators who choose to accept the token.

Nafter has only been live for less than a month and has already attracted influencers, creators, and artists with a combined following of more than 70 million onto its platform.

Some of the creators and influencers who are already minting their NFTs on Nafter are Kristen Hancher, Kristina Bashkirova, Christian Garcia, with many more to come.

Nafter’s aim is to attract as many global influencers and their followers as possible.

If you are a content creator or an influencer and would like to get involved, drop us a line on: [email protected]

Disclaimer: All investment strategies and investments involve the risk of loss. Nothing contained in this article should be construed as investment advice. Any reference to an investment’s past or potential performance is not, and should not be construed as, a recommendation or as a guarantee of any specific outcome or profit.